* No spam ever. Unsubscribe anytime.
Creative Writing: Behind the books

Friday Fiction: Work Has Started on In The Hour 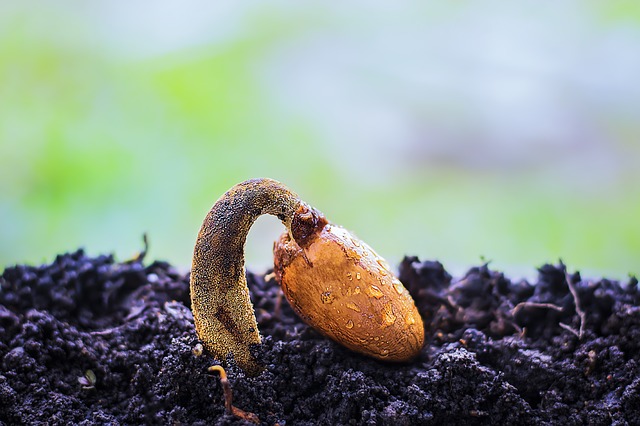 I get a lot of emails asking about In The Hour, the final book in my Irish Trilogy. I’m pleased to say that work has started. It’s in the earliest stage and I haven’t put down a delivery date yet. I’ve learned through painful experience not to do that while I’m still only in incubation: the second stage in writing a book.

There’s something about this stage, perhaps because it’s the most imaginative stage of the process, that is completely removed from reality. On the hand, we underestimate the amount of work it will take to complete the work, to get from desire to done.

So we find ourselves making grand declarations about being finished a lot sooner than is likely. While on the other hand, and sometimes in the same breath, we’re angsting about not having enough time to get the work done.

This deluded two-way trip seems to be part of the process, no matter how much time we actually do have in reality.

Incubation: The Second Stage in Writing a Book

I’m in a very busy time at the moment. It’s always the busiest time of the year at ALLi, the Alliance of Independent Authors, as we prepare for the London Book Fair and our birthday celebrations. (ALLi was first launched at the London book fair in 2012, so it’s seven years old this year).

And we are also upgrading three websites, so they integrate seamlessly, working on a submission to various governments about copyright.

Why am I talking about this in the Friday Fiction column? Because at the same time that all this is going on, I am also writing that novel. I’m not putting it off, just because I’m busy in the day job. I’ve learned from experience that when I do, the day job gets done but the novel doesn’t.

The call of the outer is always louder, and more insistent, than the inner call. One of our most important jobs, as creatives, is to prioritize the inner life. As in: put it first.

In the incubation stage that doesn’t mean a lot of words are appearing, not just yet. In this phase, at first, it’s fragments only, wisps of setting and dialog, loose and unconnected. What stops many books being born, and what slows their progress, is authors not trusting these fragments enough.

Not knowing how to collect them. And interfering with them.

I know this intimately: I wasted many a year doing all of the above. Now I know (a bit) better but can still find it hard to follow my own advice.

Here are my top three tops to ensure that I get the best use of my time during this incubation stage. I’ll be trying hard to make this the first novel where I actually do follow my own advice.

Incubation: The Second Stage in Writing a Book Tip 1: Give It Time

Don’t wait until you have time to write. Instead, make some writing time today.

I meet a lot of people who tell me they want to write a novel. And that they are going to, when they have the time. I know that 99% of them never will because you don’t wait until you have the time. You make the time. Now. Here. Today.

In the incubation stage, you can make a little time for writing in every day, in every hour. You can make a lot of words by talking your ideas into your phone. You just need to store those words into the proper container, so they are there ready for you when you come to write and edit that first draft.

But the secret is, the container doesn’t have to be a big enormous field of it. A little window box is all you need at any one moment. Put all those windowboxes together, over time, and you have enough to fill a field

Incubation: The Second Stage in Writing a Book Tip 2: Harness the Power of Creative Rest.

Creative rest is always essential for every creative– not a break from process, but the most important dimension of process. And never more so than in the incubation stage.

The liminal areas between waking and sleeping are where fragments of a book shimmer into consciousness. Sleep lots, and spend time in the in-between places, before you get up and before you drop off to sleep. Allow your subconscious to roam freely and when an idea rises, capture it. Same if you wake during the night.

My favorite teacher about the power of sleep and the liminal, in-between place between sleeping and waking is Rubin Naiman. I also love the yoga nidhra teacher, Jennifer Piercy.

This is about using good tools to capture those wisps of ideas.

I use a notebook and pen, and keep one beside the bed, near the couch and the bath and anywhere I might drift. Increasingly, though, I find myself using my phone as it can capture so many more words and then they are captured as text.

For laying out the novel, my favorite tool is Scrivener 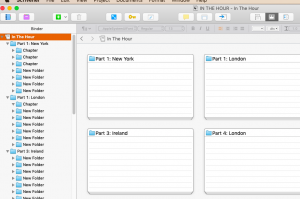 For a novel, at the start I set up five folders, knowing that most long stories break up into five acts. These are Part Folders.

I will name them at the end, when I understand the theme of the story but for now, all I know is that this is a story that will move around. Jo, the protagonist, does not lose her wanderlust and the start of the story sees her in New York.

She will move to London, though, and ultimately the story is going to end up in a small seaside village on the south coast of England. Near Hastings, where the Normans landed 100 years before they found their way to Wexford, where the previous two books are set.

So for now, I’m just using the word “Parts 1, 2 etc. and the location that each part will be set in. 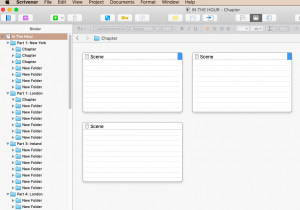 Next come the chapters.

In each Part, I put seven chapters. Of course, as the novel fleshes out, I may end up with more or less but 35 chapters or so, of 2000 words on average (some will be much longer, others much shorter) gives you a 70,000-word novel.

I’d love someday to come in with a 70,000-word novel. Mine are usually longer, mostly around the 100,000 mark. This one already feels like it will be longer than that (I want to make mention of the civil war in the New York (when the Irish “became white”) and  take a deep dive into the 40s and 50s in Ireland) but for now I’m just looking for a workable structure.

Each chapter gets three files, each a potential scene.

As an idea or image rises, I capture it in written words, as accurately as possible. Once I have a snippet of text, I place it roughly where I think it would go in the story and–if it feels natural–write a tiny bit of story around it. The important thing here is to write it as story:  direct dialogue, setting, action. No summarizing, not here.

If a summary of what’s going on rises, I take it offstage, as it were, into the notes folder. 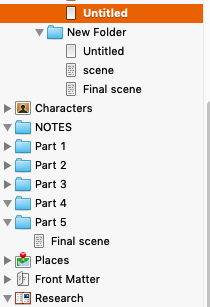 There I set up a folder for each Part of the book. Thoughts about what’s going to happen in my (author’s) voice go in there, as do instructions to myself.

Anything in a character’s voice goes straight into the story file.

For example, I know in this story that Rory is coming to New York at some point, with his daughter in tow. That she is coming into teenage years and Richard, Jo’s son, is about eight when this happens. Mayhem ensues (of a specific kind that I can’t reveal without a spoiler; yes, there’s a twist in this book too, like the other two). This kind of summary, above, goes into notes.
An example of what doesn’t. Yesterday Rory said this sentence in my mind, demanding attention: “It’s you, Jo. You. It was always you.”
The way those words were said gave them their place. It was Rory’s voice, so it does into a story, not a notes file. And though I’m not yet sure if he said them because they finally manage to get it together, or they are finally really are leaving each other forever, maybe through a death, I do know that the depth of feeling around those words means they belong at the end.

So they have gone into the second last story file in the Act Five folder.

A trilogy will have a coda after the denouement, so I’ve reserved that for last. As I write this blog post, I’ve realized  something else that happens in that chapter now,

So that’s my method. I hope it helps you, in some way, to find yours.

Whatever way you choose, keep your book close, make it your secret with yourself.

No matter how busy things go to, no matter what else is going on in your life, you can still be writing a novel. It’s a long-term endeavor, which will take many months, perhaps years, to complete. Today, here, now: you can find something you can do.