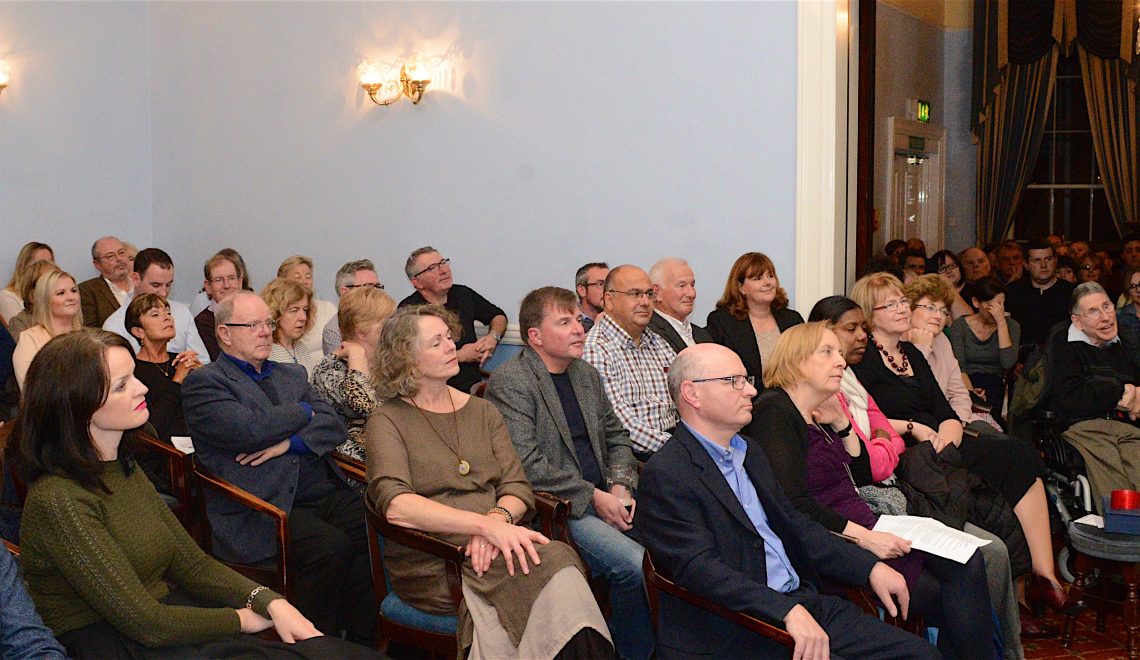 On October 25th, which also happens to be the night the Man-Booker prize winner was announced this year, I won my own first prize as a novelist.

It’s not likely that you’ll have heard of that award, for three reasons. It’s an Irish prize, this is its first year in existence, and it’s a prize for independent author-publishing. So minority, all the way.

But the award ceremony was packed, delivered to the room full of fervent book-lovers you see above. And I couldn’t have been happier about it, had it been the Man-Booker itself.

And when, next day, I received a beautiful congratulatory bouquet from one of the self-publishing platforms I use, Ingram Spark, I almost cried.

I’m not somebody who cries easily — but I was reminded of the last time I received flowers from a publishing company. These were tears of joy. 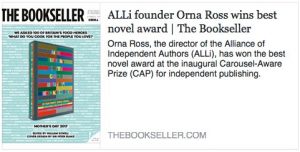 Click to read The Bookseller’s Take On The Prize

I don’t usually enter awards or competitions. For me, one of the best things about literature, about all creativity, is that it’s non-competitive.

But as soon as I heard about the Carousel-Aware Prize (CAP) for independent publishing, it felt different.

In a world where self-publishing awards are often little more than money-raising schemes for their organizers, this is a non-profit endeavor, in aid of the depression charity, Aware. The prize is not just glory and a bauble but print book distribution in Ireland’s major bookstores. And its aim is to further the self-publishing movement in my home country.

I wanted to support it.

I’ll be writing in a while about the book store experiment but for now I would just like to pay tribute to the organizer, CarolAnn Copland,  and her volunteer team for all their hard work.  And put on record why the award means so much to me.

The prize is for my novel Her Secret Rose, which tells the story of the relationship between the Irish poet WB Yeats and his muse, the revolutionary Maud Gonne.

Some chapters of this book were originally published in a book called A Dance in Time.  When I published that novel, back in 2008, Penguin refused to put Yeats and Gonne’s names on the cover, as that didn’t align with their branding for my books (more on this in my self-publishing story here).

The morning A Dance in Time was published, they sent me flowers. It is a kind gesture that Penguin makes for all its authors, on publication day, but I will never forget how I felt, on receiving them. It felt like a hollow gesture.

By then our relationship was over. They didn’t like my book and I didn’t like how they were packaging and promoting it. I didn’t know where I was going to go next, but I knew I wouldn’t be publishing another book with them.  And so did they.

I put the flowers out on my hall table. They were very beautiful but I couldn’t look at them. I took them outside and put them in the bin.

My very first blog post was actually written that same day, the day A Dance in Time was launched.

It was not a good time for me. I was also in cancer treatment at the time but I felt worse about what was happening to my novel. Back then, there was no Amazon, no Ingram-Spark, no digital publishing, except for blogging.

Being able to blog back then helped me so much. And now…

How things have turned for authors.

I feel blessed beyond belief to be here for this time in publishing history. Not just because I’m having more fun, garnering more readers and making more consistent money than at any time since I started to publish fiction. But because self-publishing has restored for me something I was in danger of losing when corporate structures were my only choice: creative freedom.

These great things are happening for authors all over the world.

So yes, I’m personally thrilled that Her Secret Rose has been recognized by CAP’s fine team of judges but I’m also thrilled to know how this award will positively effect the self-publishing movement in Ireland for years to come.

It’s enough to bring tears to my eyes.

Carolann Copland, organizer of the awards, (left) with some of the winners, including ALLi member Lorna Sixmouth (right)