Each Friday, I publish an extract from my work in progress, currently Dancing in the Wind, based on a true story about the controversial love triangle between WB Yeats, his longtime muse Maud Gonne, and her daughter Iseult. As three talented mavericks try to redeem their past against a background of escalating war and revolution, can they rise to what they truly need from each other?

This novel is narrated by Rosy Cross, a working-class Irish woman and is set in France, England and Ireland, during the first world war and Irish Easter Rising. This week’s extract takes some liberties with historical facts. Maud Gonne was arrested by the British government but not April 1918, as part of the German plot, and not when on the way back to England from France as depicted here. For plot purposes, I’ve moved the time forward, partly for dramatic purposes but mostly because it helps me to convey the emotional truth of the tensions between Maud and Iseult, at this time.

This extract comes at the mid-point of the novel. They are leaving Iseult’s beloved France because Maud Gonne insists that the family must return to Ireland and “do their bit” for the cause of Irish independence. WB, faithful friend and would-be love, assists. 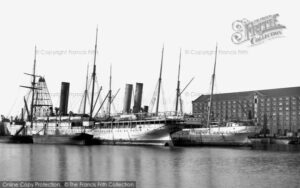 They have docked at Southampton. First leg of their journey crossed but they’re not fully on English soil until clear of customs and on the London train. They’re all coiled tight as they emerge from their berths, and shuffle in line along the corridor and up the stairs towards disembarkment. Jittery and tense, and uncharacteristically silent. Everything around them quivers, because of their collective nervousness. They are afraid to speak to one another.

Iseult and WB bring up the rear, he assisting her as she stumps along on her cane, so that stewards struggling with the canary cages and animal paraphernalia, and other passengers, cut in ahead separating them from the others. Iseult feels sick, from the throttle and tang of the ship’s organs, but mostly from the metallic taste of fear in her saliva.

The shuffle slows as the crowds gather in corridors, on stairs, on deck, as close as they can get to the exit and the gangway. Finally arriving on deck, Iseult finds the air is cold and the wind blowing so hard she can feel it in her teeth. Above is the screech of gulls, below the swish of waves, and within, dank foreboding.

From her vantage point on the stairs, she can see the dock and the town behind it, stretching into the distance, and down below Moura and Seán, Josephine and Delaney, close to the captain and first-mate bidding the passengers goodbye as they disembark. Southampton is one of those old atmospheric ports that Iseult would normally love. Some ships in the harbor look like they haven’t sailed in a hundred years.

In the crowd on the pier, one man draws her attention. Afterwards, she wonders why. He’s neither rough nor fine, fat nor lean. His hair is neither straight nor curly, his features neither handsome nor plain. No distinguishing features, in short, but she notices him, as he progresses through the crowd with slow purpose. A smooth-shoe thief, carrying a clipboard.

He stops at their ship, crosses the gangway, hands over a piece of paper. The captain reads, then looks up. There is some whispering and pointing and when Moura and Seán reach the gangplank, the captain’s hand goes up and stop their progress.

“I am Maud Gonne,” Delaney says. and the officer exchanges an eye roll with the captain.

“It’s all right, Delaney,” Maud Gonne says. “I’ll take care of it. All our papers are in order, Officer. And…”

“Madame Gonne, I am under orders to escort you to the quartermaster’s office, on behalf of the British Passport Office.”

It is a terrible moment. Willie and Iseult stand by the railings, helpless, “Damn it to hell!” Willie says.

WB begins to push past the crowd.

“Maman! No. Let go of my mother!” Seán shouts and pummels the nearest officer’s thigh with his fists. Surprised by the boy’s ferocity, the officer lifts him off his feet, and holds him at arm’s length.

The furtive one reeks of ambition. Yards away, Iseult can smell it off him. Like a big cat stalking an antelope, enjoying the cold drum of its own heart. Clutching the railing above, she watches in horror as he tries to haul Moura away, while Delaney tries to pull Seán from the other officer’s grasp, arguing in her coarsest voice as she tussles. “You have no right to yer questionings. Our papers are in order, the lady said,” she shouts, backing into one of the trunks. If she’s not careful, she’ll end up in the water. And now yes, she has knocked a trunk off the pier, and it’s lying in the brink, bobbing in the water between ship and shore.

WB is valiantly pushing his way through, but before he can reach them, Maud Gonne has been whisked away.

Some hours later, Iseult, WB, Delaney and Seán are huddled together on the single bench outside the quartermaster’s office. The port is noisy, full of embarking and disembarking troops. They are tired and hungry and the bench, the only place to sit, is precarious, with green paint peeling, and some of its bolts too loose.

WB says, “I have so much awaiting my attention in London. I really cannot keep making myself available for these dramas.”

“If I had the choice, I would not,” Iseult says. “Liberate yourself.”

He looks at her with a face designed to remind her that she does have a choice, and why will she not say yes to his offer to give her a new life of the intellect among writers and artists, and now she’s sorry she spoke. 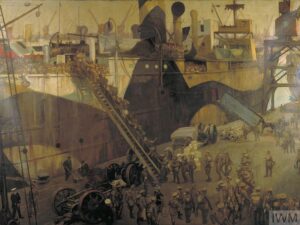 Troops boarding warships bound for France in 1917. From the Imperial War Museum

The door clangs open, and an officer comes out with Maud Gonne ahead of him, his  overlording hand on her shoulder. She look dazed, a little shamed, like a soldier who’s been tear gassed, and her travel costume is dishevelled. They have searched her. To what extent? But she’s still Maud Gonne, still large and still in charge, and surreptitiously, she makes a victory sign at them, to Seán’s great delight.

Iseult knows they are all supposed to feel as Bichon does, uplifted by the gesture and by Moura’s resilience, but what she actually thinks is: I cannot bear another moment of this selfishness.

“Come,” says Maud Gonne, as she reaches them. “Let us catch the next train to London.”

“Not so fast,” the guard says. Then he points at Iseult and barks: “Miss Gonne!” Iseult looks up at him, startled as a faun.

He is a man in his forties. His chin looks somehow naked, Iseult thinks, as if the lower part of his face were a feeding baby, or a large sponge. The skin of this mournful chin-pit is yellow, the color of a sickroom light. He indicates that she is to accompany him into the hateful little shed.

Maud swings round, aghast. “No! She’s utterly innocent. And injured.”

WB says, “My dear fellow, is this really necessary? I’m certain we can avoid any further unpleasantness. My name is Yeats. William Butler…”

The older, burlier officer says, “We know who you are, Mr. Yeats. And you’d be well advised to steer clear of the matter. This way, Miss please.”

And Iseult, leaning on her stick, stands and hobbles into the hut, leaving the stunned little crowd marooned on the bench, the quartermaster’s door slammed upon them, again.

“In ten minutes’ time, it will have been four hours!” Maud Gonne says. “Four hours. This is monstrous. Monstrous!”

As she speaks, the door opens. Iseult emerges, her clothes disarranged, tears in eyes red and puffy from crying, emanating a deep, opaque despair. WB, imagining a strip search, her hips pressed against the chair, a loutish woman and her oafish fingers searching her lovely clothes and slender person, finds his heart twisted beyond endurance with pity.

“May we now leave?” he snaps

“Officer, this is monstrous!” Maud gives him her frostiest stare. “we really must insist… And if you performed the same search tactics on my niece as you did on me, we shall…”

He says, “Leave it out, Madame. Your insisting days are well over.”
A paddy wagon is rumbling over the cobbles. Four more officers jump down from it. “Madame Maud Gonne MacBride, you are under arrest”.

Maud says, “What? What have you done, Iseult? What did you tell them?”

Delaney turns to Iseult rigid with fury. “Oh you useless, useless thing”. She starts to shout at the guards. “Madame is going nowhere without us. We’ve come to see the birth of our nation. Madame is not done yet, not by a long half…” On and on in words of that nature.

All ignore her. The guards are gathered around Maud, rousting her into the back of the paddy wagon. She now, as always in a crisis is calm. “Shaun, dear heart, be a good boy for Delaney. Willie, you’ll get the doctor round for Iseult’s foot? We need an x-ray picture…”

“Oh my dear, yes. Yes, of course. And first thing in the morning, I shall send for a solicitor.”

“We know what to do, Maman,” calls Seán. “We’ll do everything right.”

The door slams on the paddy wagon.

Through the window, they see her pale hand gripping the bar. The wagon rumbles away, down the cobblestone street. Iseult stares after it, trying to avoid the eyes of Willie or the furious Delaney, who is screaming now, a vein at the side of her forehead swollen to the size of a throat-cricket, its dark blue quivering.”What did you say? What did you say to them?”

To Iseult, they are all now like ghosts of the air. Her own body too. It feels like the hard matter in her bones has dissolved. The sudden thought comes that perhaps, actually, it would be a relief to be dead. To give in now, the way the face of a wave on the ocean relents to its fall.