By John Synge, as imagined by Joseph O’Connor in Ghostlight. 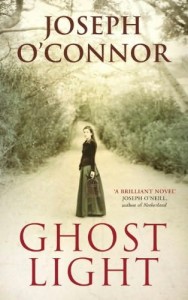 “He claims… that he writes out of the desire for consolation, that something in story-making eases him, assuages his demons.

“But it also exhausts him. He has to be careful. (‘A man cannot work with the cream of his brain for more than six hours at a sitting.’)

“Late at night he goes to his study in the stilled, dark house and looks at what he has written that day. A quarter-measure of watered whiskey, and he reads over his pages, and the crippled old Labrador snores on the camp-bed that is set beneath a tapestry of hunters.

She can picture the room, the green shade on the lamp, the leather-mounted blotter on the sea-captain’s desk, a Waterford vase of buttercups from the railway embankment wilting on the bedside table. The dim mullioned window, the soft scratch of his nib, his shirt-sleeves unbuttoned like a gambler’s at a table where the game is running on long.

“Sometimes he looks out at Dalkey Quarry in the moonlit distance, or he listens to the servants moving quietly about the house. Where are they going so late? What are their stories? Why do they pause by my door? The rasp of the match and the small globe of flame as he lights a last bowl of tobacco.

“He knows there is only one thing that separates us from the beasts: it is that everyone carries an Eden, an inner realm of silence, and this is what some call the soul, having no other name for it.

“The point is to allow people to reach it, be blessed by it, even briefly, to save them from the filthy undermurmur of living.”