Only in San Francisco

I’m awake in the middle of the San Francisco night, maybe because my body’s still on London time, maybe because the moon is shining in the window. No matter. As always, I’m over-the-moon delighted to be here. 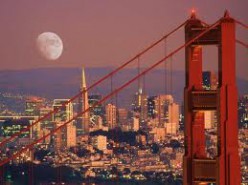 My relationship with this city began before I ever came here, with TV images and information leaking across the Atlantic from America to Ireland: The peace and love, long hair and free spirits of the hippie movement were a flow of fresh air to a child growing up in the caustic silence of late 1960s rural Ireland.

San Francisco’s role as the epicenter of the AIDS epidemic in the 1980s expanded my sense of this town as a symbol for freedom and love and took me, a little white Irish straight girl, into the world of sex, race, and gender politics.

So when writing my first novels, After The Rising and Before The Fall, and needing to get my protagonist away from the weight of her repressive family history—a double murder, civil war conflict, and Roman Catholic hegemony—it was to San Francisco that I dispatched her, to San Francisco, to heal and find herself. It gave me an excuse to visit (research! research!), but mainly it gave me a place where my protagonist, Jo, could find progressive values, countercultural thinking, and a liberated life, all of which were in short supply as she grew up in Ireland.

This extract from Before The Fall, written on a previous stay here some years ago, summarises what both I, and the narrator Jo Devereux, love about the creative spirit of San Francisco.

“In those early days I walked everywhere, up and down the unfeasible hills, through streets where music drummed out from under psychedelic blinds, through parks where grey-haired people went roller skating, through beaches where meditators worshipped the morning sun. I reveled in the sunshine and also in the fogs that billowed in from the ocean, as if huffed through the Golden Gate Bridge by an unseen mouth…

I love this place, I would say, over and again, as I walked around. Born out of silver and gold, built on wild spending and carousing, this city had given the world beats and hippies, free love and flower power, gay pride and sexual liberation. It was never a small town, but wild and lawless, gaudy and greedy, diverse and world famous, right from the start.

In my early days here, I walked everywhere, revelling in winter sunshine and also in the fogs that  billowed in from the ocean as if huffed through the Golden Gate by an unseen mouth. They shrouded me in a blanket of anonymity as I went, and ensured I never took the sun for granted.

I even came to love its faulty underpinnings: San Andreas and Hayward, San Gregorio, Greenville and Calaveras and the earth shudders they threw up, always hinting towards the long-anticipated ‘Big One’ that might come at any time and topple our town down on top of us or trigger a tsunami out in the ocean, a tidal wave that would swell and swell as it swept in from the bay, rising taller than the bridges and skyscrapers it broke against, smashing them to smithereens and sweeping away the bits in its flow, like so many pebbles and twigs.

I hadn’t been here long when I first heard the expression ‘only in San Francisco…‘ It came to be widely used afterwards – ‘only in Hollywood’, people would say, or ‘only in Europe’ – and usually used disparagingly. But I first heard it applied to the town I was beginning to own and I took it as a tribute. So many things could, and did, happen only in San Francisco. This city had given the world Beats and Hippies, Free Love and Flower Power, Multiculturalism and Gay Pride …

Only in San Francisco, it seemed to me, was American can-do culture applied so  vigorously to something more than money.”

After The Risingcreative business blockcreativisitgallerysan franciscoSusan Mary Pollexfenwhat are you creating this week
I’d love to hear what you think. Please comment in The Guestbook